Charities to help the Ukraine?

Your Catholic Week in Review (What is Charity Edition!)

Ever since Russia invaded Ukraine, people all over are looking for ways to render assistance to those most grievously effected by the war.  On Tuesday of this week, the National Catholic Register unfortunately encouraged donations to both Catholic Relief Services (CRS) and Caritas Internationalis.  As you will recall, we’ve exposed CRS for over a decade now because of its involvement in the promotion of contraception and condoms.  As for Caritas, it is on the governing body of the World Social Forum (WSF), which is itself a Marxist organization that pushes abortion, homosexuality, transgenderism, and witchcraft.

For those who wish to contribute to an organization that is among the “Safe” charities on our Charity Reports List, the only organization that we are aware of that is marked “Safe” on our list that is currently operating in Ukraine is “Aid to the Church in Need.”

Also, because CRS’s annual Rice Bowl campaign has begun, and lasts all through Lent, many have recently been asking me for a flyer to print out and leave around their parishes.  So, we just produced a flyer (image in the middle of this newsletter), which you can download here and either print on your home printers or take to a local printer to distribute.

I find it apropos that the word “charity,” or rather, “caritas” was the central focus of the Epistle this past Sunday (for those who attend the TLM, anyway).  The Epistle was St. Paul’s famous exhortation on the nature of charity, and it is an essential topic that I think is too often read with little depth.

In the first three verses of St. Paul’s first letter to the Corinthians, he gives examples of what charity is NOT, and he does so by indicating certain conceptions of charity in act, but not in substance.  In the first place, St. Paul says, “If I speak with the tongues of men, and of angels, and have not charity, I am become as sounding brass, or a tinkling cymbal.”  Many misinterpret this line to indicate that St. Paul is speaking literally about the physical use of unknown languages, and sometimes claim that this is verification of what the charismatics commonly refer to as the “gift of tongues.”  But the great commentator on Scripture, Fr. Cornelius a Lapide, says this:

“The tongues of angels mentioned here are not therefore addressed to the senses, as Cajetan thinks, but to the intellect, since these tongues are the very concepts of angels, most perfect and most beautiful. The tongues of angels is certainly a prosopopœia and hyperbole, that is, it denotes a most exquisite tongue. So we say in common phrases "He speaks divinely;" by a similar hyperbole it is said "the face of an angel," that is, a most beautiful face. So Theodoret and Theophylact speak, because, as we know, angels are most beautiful in themselves, and show themselves such, both in appearance and speech, when they assume a body. So therefore Paul here, as elsewhere afterwards, speaks on a supposition by hyperbole, chiefly for the sake of emphasis.”

In other words, St. Paul is speaking hyperbolically, to indicate one who speaks with great eloquence and beauty, even on higher things.  But if one does so out of vainglory or some other motive than the salvation of men, then, as Fr. Cornelius wrote, “giving forth an uncertain and confused sound.”

Fr. Cornelius explains that what St. Paul is illustrating is that there is no value in the performance of miracles or even in the mere possession of great faith, but that it is friendship and love of God alone which merits.  Bear in mind that in our early catechism classes, we were taught that God made us to know, love, and serve Him in this life so that we can be with Him in the next.  Knowledge of God is only the beginning, but knowledge of God is not love of God.  As we were taught, we only serve whom we love, and we can only love whom we know.  In this, we can understand that faith and knowledge are similar as they are an expression of trust, but they are not yet an expression of love.  Fr. Cornelius points out:

Verse 3 of St. Paul’s letter to the Corinthians, however, is the most pertinent to our concerns.  He wrote: “And if I should distribute all my goods to feed the poor, and if I should deliver my body to be burned, and have not charity, it profiteth me nothing.” 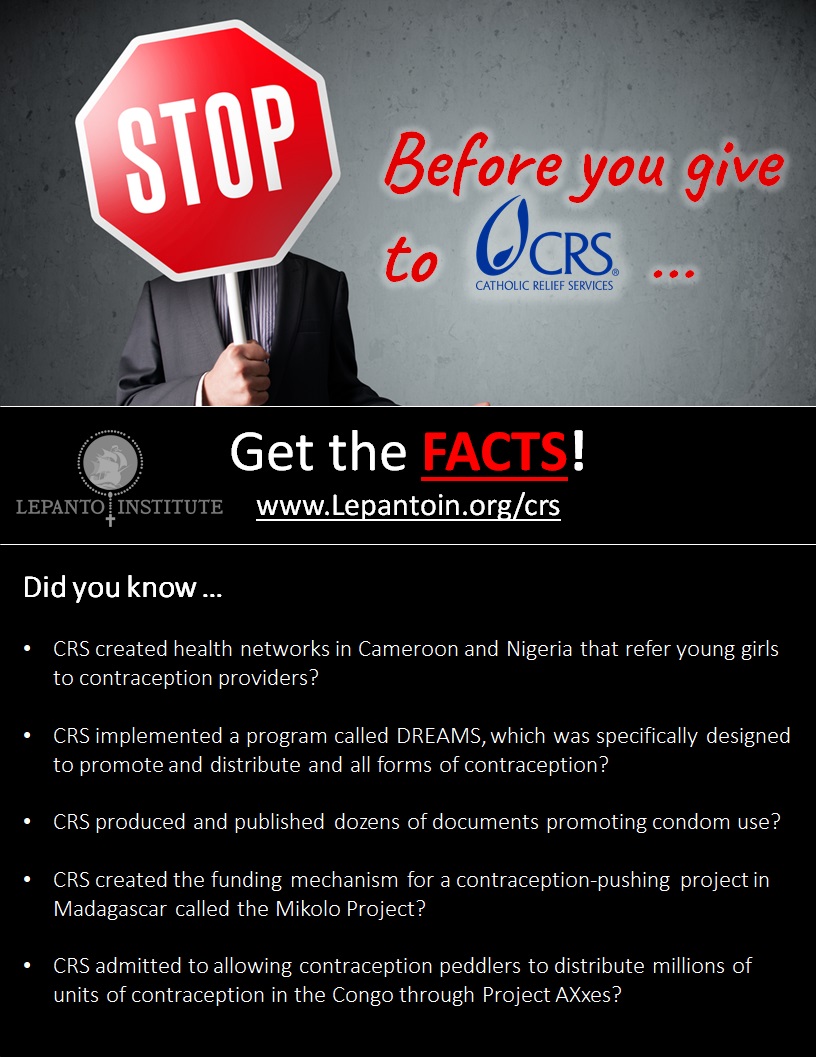 Organizations like Catholic Relief Services, the Campaign for Human Development, and poorly catechized bishops and priests throughout the world have a bizarre tendency to equate feeding the poor with charity.  The truth of the matter is that it is because of charity that we are motivated to help those in need, but the mere act of doing something good for someone else is not, in and of itself, “charity.”  If it was, then St. Paul’s statement here would make no sense because he definitively separates the action of distributing goods to the poor, even to the point of great bodily harm, from charity itself.

So, in sum, charity is NOT eloquent and beautiful speech, even on the highest things; it is NOT prophecy, knowledge, and miracles wrought through faith; and it is NOT mere care for the poor.  While all of these things can be motivated by charity, and therefore can be expressions of charity, those things are not “charity” in and of themselves.  And the reason is that those things can be possessed and enacted without charity.

“Charity is patient, is kind: charity envieth not, dealeth not perversely; is not puffed up; Is not ambitious, seeketh not her own, is not provoked to anger, thinketh no evil; Rejoiceth not in iniquity, but rejoiceth with the truth; Beareth all things, believeth all things, hopeth all things, endureth all things.”

Charity, is, in the truest sense, pure love.  It is impossible to explain this any better than did Fr. Cornelius:

“Ambrose reads: "Charity is high-souled" (so also S. Cyprian and Tertullian, de Patientiâi , c. 12, read), "and is pleasing." Note, charity is long-suffering, not formally, but in the way of cause, because it produces patience and kindness; because patience, as well as kindness, is an act not elicited but ordered by charity. Tertullian ( de Patientiâ , c. 2) beautifully teaches that no virtue is perfect which has not patience as its companion, and so in all the beatitudes which Christ (in S. Matthew 5:0 ) enumerates, patience also must be understood. He teaches also (c. 12) that the treasures of charity are held in by the discipline of patience, and that charity herself is taught by patience as her mistress; for, expounding, these words of the Apostle, "charity suffereth long," he says: Love, the great mystery of the faith, by whose training is she taught save by that of patience? Love ," he, says, " is high-souled, so she adopts patience; she does good, so patience works no evil; envieth not that also is the property of patience; savours nothing of wantonness she has drawn her modesty from patience; is not puffed up, behaves not unseemly for that belongs not to patience. But what would he have left to impatience? Therefore he says, 'Love beareth all things, endureth all things,' that is, because she is patient.”

As love, charity itself follows the proper order of love, beginning with love of God, flowing to love of neighbor, and ending with love of self.  From the love of God, we derive a love of neighbor, not the other way around.  And from the love of neighbor, we find a love of self … but this does not work in reverse.  The essence of God is love, and as such, God is the source of all love.  By loving God first, we share in His desire for the salvation of souls.  And with a deep and abiding desire for the salvation of souls, one who possesses this kind of love would be exceedingly patient and kind, dispensing with any sort of envy, pride, or ambition, and can exchange anger for true sorrow … not because of harm or wrongs he receives, but because of the spiritual harm an individual does to himself through vicious acts.

So, when an organization like Catholic Relief Services claims so much good that it does to feed the hungry, clothe the naked, and shelter the homeless, one has to ask why they do not also evangelize, and warn against the spiritual dangers of contraception, abortion, homosexuality, and false worship.  Can it be said that CRS is acting out of love of God?  Can it even be said that CRS is a charity, as defined by St. Paul?

At the end of the world, one has to wonder how those who work for an organization that claims the name “Catholic,” but does nothing for the salvation of souls will be able to answer for actions which St. Paul says, “I am become as sounding brass, or a tinkling cymbal; I am nothing; and it profiteth me nothing.”